Let me introduce myself

I am not an engineer; I am not a technician. Truly, I know nothing about computers so how did I end up in the Labdoo family? I wonder this, myself! I believe the reason is because I love humanitarian projects and worthy causes that encourage solidarity.

My name is Graciela Andrade and I am known by most of my acquaintances as the "FREE-Hugger Chela" since my distinctive visiting card is a tight and long-lasting hug. In the same way that I love to embrace people, I immediately embraced what I have named the Labdoo Joint-Ad-Venture. 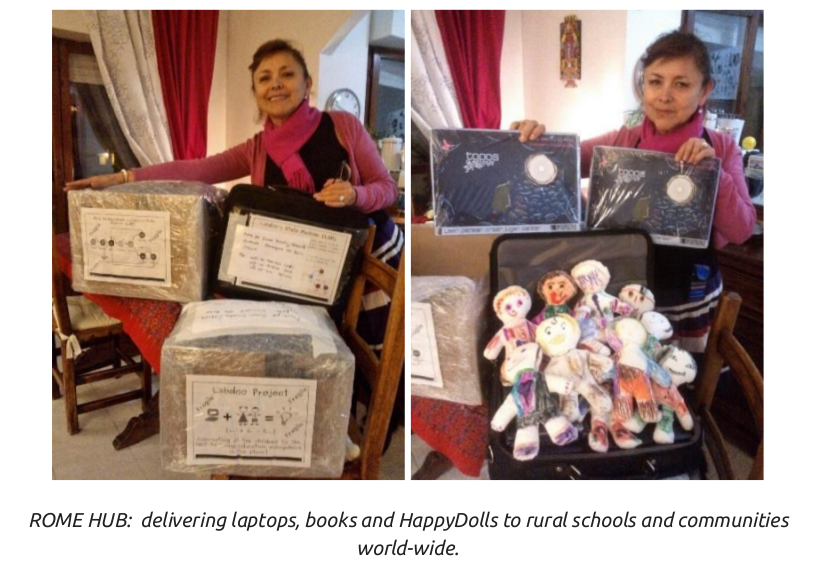 I am a national citizen of Ecuador but have lived in Italy since 1980. Coming from a developing country, my greatest surprise was discovering that in Europe, there is so much social welfare available in comparison with my native homeland. Health and education are taken for granted whilst in developing countries, people need to struggle for these basic human rights. I strongly believe that only those who have witnessed poverty, can really appreciate what he/she has.

For almost all of my working life, I was very fortunate to be a part of the United Nations family. I consider this unique experience to have been an enormous privilege as I was able to commit myself to goals which aimed to serve the well-being of people all over the world. This set of circumstances acted as an eye-opener for me especially because I was coming from a previous working environment where the only objective of our daily job was to increase the economic revenues.

How it all began

Whilst working for the United Nations, I had the opportunity to travel quite often to numerous different countries where I became aware of their manifold needs and realities. During this time, I started dedicating myself in a personal capacity, to initially, very small projects thus making a parallel commitment with my professional undertakings. In turn, these private ventures became one of the fundamental purposes in my life.

Suddenly, I discovered that the answer to my question “How can I help?” was to model myself as a bridge between the “demands” of the needy who did not know where to ask for help and the “offers” of those willing who did not know how to help. My purpose became to share with the disadvantaged what was available to the majority of the privileged.

Both! All of my modest initiatives focus on improving livelihoods and supporting education. In fact, this adventure started on one of my trips home to Ecuador. I decided to take a look and observe my surroundings in order to identify what needs were apparent. So I visited a local, rural community where a very ratty school building existed and although it was fully functioning, the maintenance of the structure itself had been abandoned after the school's “benefactor” died. After talking with the local residents, I offered some assistance. My proposal was to provide the bricks to repair and actually build a proper schoolhouse.

From this experience, I learned that the key answer to many problems can be found in “communication”. It is as easy as this: talk to people; listen to people; we can get close to people in many ways, feeling solidarity in our emotions whilst being supportive with the facts. 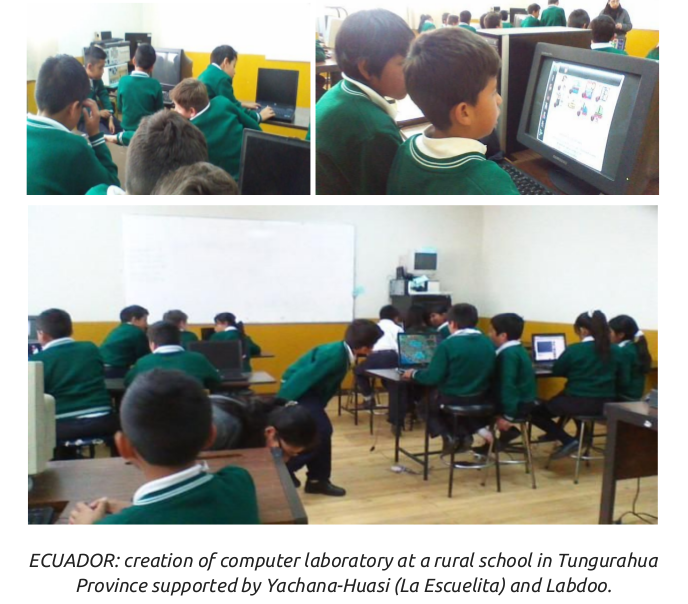 Once back in the office, I shared my experience, feelings and ideas about adopting the school with my colleagues. They were immediately taken by my own enthusiasm and spontaneously offered their support with donations appropriate to each one's individual circumstances. Like a stone in a pond, the first circle was now reinforced by many more, larger circles of solidarity expanding rapidly to my family, friends and social network at both a local and international level. 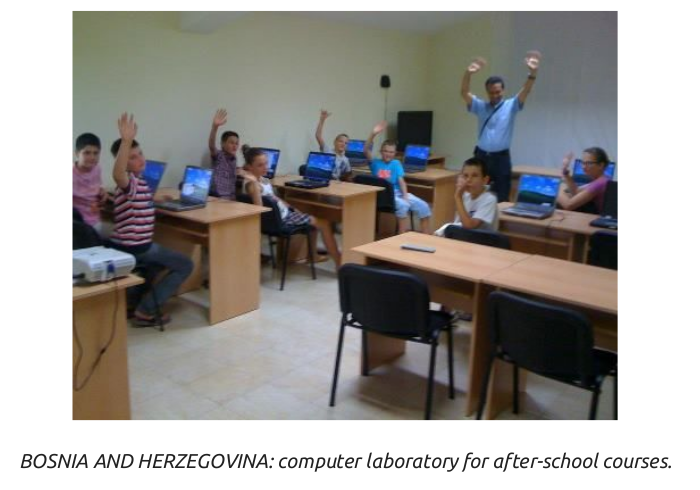 When did Labdoo step into all this?

My private ventures continued slowly but surely until 2010 when I was introduced to Labdoo by my dear Ecuadorian friend Montse Vivero. She is the founder of Yachana-Huasi (La Escuelita de Ecuador), a non-profit initiative based in Barcelona. Montse spoke to me about Labdoo, describing it as "a group of volunteer engineers providing laptops to schools and communities in need; to support education, personal, intellectual and cultural growth”. We nicknamed them “Los Ingen-erosos” (Ingenieros generosos) in Spanish which could be translated into English as “The En-generous”(Generous Engineers). Montse thought we might request some laptops for the "Escuelita" and promptly, the answer from Labdoo was "Yes".

By chance, a first, informal meeting was thereby arranged in Barcelona as I was already there for other purposes. I met the Labdoo founder, Jordi Ros with whom I started a series of fruitful collaborations. In fact, Jordi subsequently came to Rome and gave a presentation to my U.N. colleagues to acquaint them with Labdoo.

Without even realising it, I became the Labdoo Hub in Rome: Chela with no computer, technical skills but with many friends who effectively contributed their knowledge and professional expertise.  A real team capable of delivering what I like to call “panecillos calientes”, that is “little buns of hot bread just taken out of the oven” because as soon as they were received, the laptops were sanitised and transported to the needy around the world. 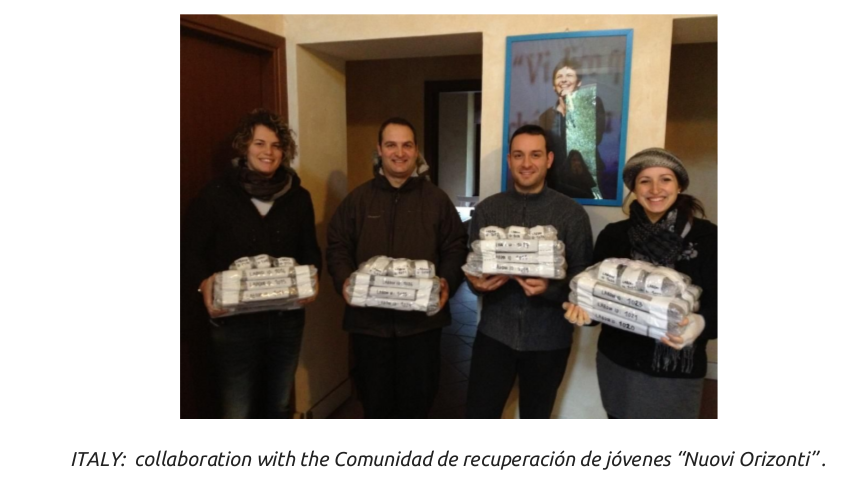 Achievements of the Roman Labdoo Hub

As well as my previously existing or newly created projects and following my encounter with Labdoo, I could now provide additional benefits to the educational/cultural programmes. I could now offer many communities access to modern technology at zero expense, thanks to the contributions of Labdoo; without incurring any economic cost and without damaging the Planet. 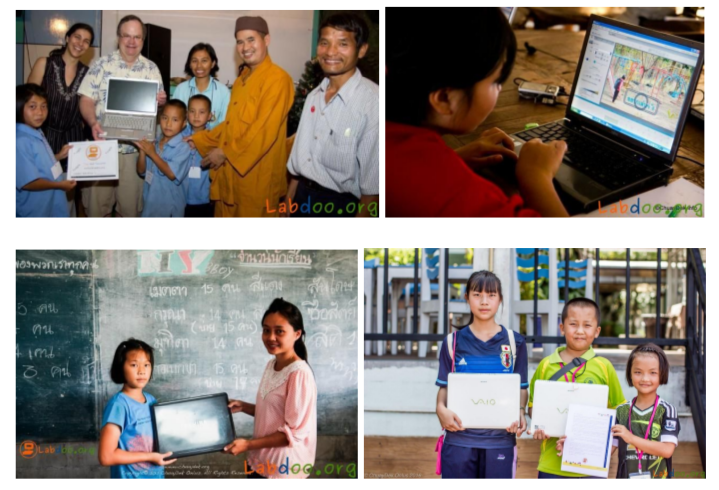 More than 100 laptops have been successfully donated to projects in Argentina, Bolivia, Bosnia, Brazil, Cambodia, Colombia, Ecuador, Italy, Kenya and Thailand. This would not have been possible without my helpful friends and collaborators Montse Vivero, Marisalee Palermo, Serena Fortuna and Gianni Silvestri just to mention a few and who are still enthusiastic partners in this adventure. 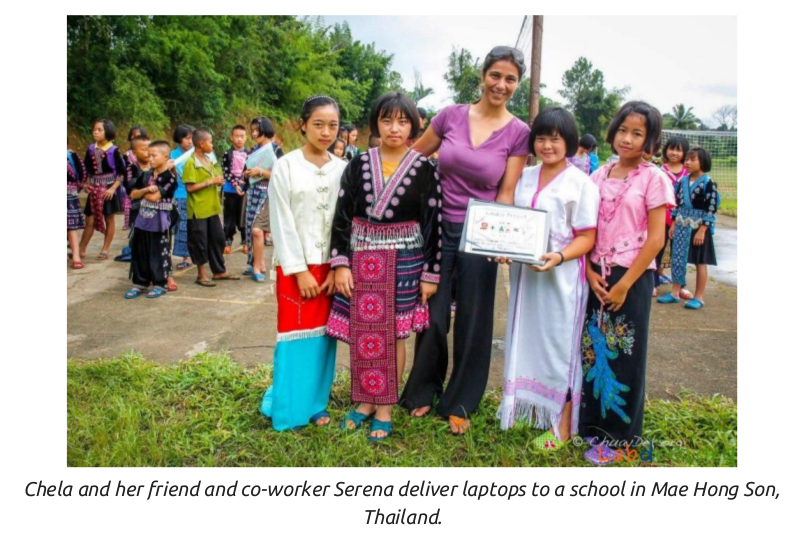 Institutions who have donated laptops to Labdoo Rome Hub:

FAO of the United Nations

Thank you for helping me to help others

For their heartfelt collaborations with Labdoo, I wish to thank the organisations and the individual donors who have contributed their laptops; the colleagues who have offered their time and professional skills in the sanitisation process of the computers and the friends who have helped with the dootrips by delivering the laptops to their destinations. I embrace the motto "Help me help others" and I truly believe that it is not necessary to help hundreds of people in order to do good because even if you only help one person, you are already doing so much. May the Ad-venture continue!